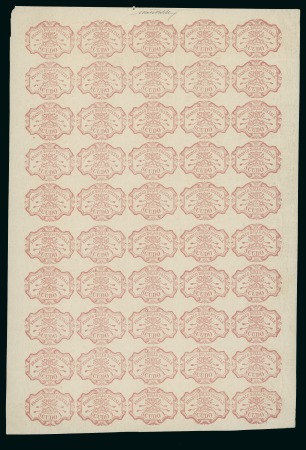 1852, 1 scudo carmine-rose, the extraordinary complete sheet of fifty, very fine impression, including the rare interpanneau between fifth and sixth horizontal rows, excellently margined all around, with outstandingly fresh original gum with only few light hinge remains in margins or in few marginal stamps, exceptionally well preserved for an item of this large format with only one crease resulting in a tear which has been closed in upper right corner, mentioned for accuracy as in no way is affecting the designs. A unique item in an outstandingly fine condition representing a quintessential combination of beauty and rarity, described by the highly renowned expert Enzo Diena in his certificate -in English- as „the single most valuable item in the entire area of Pontifical States philately“ (then it had not been discovered yet the unissued 20 bajocchi complete sheet of 100 in private hands); one of the most visually impressive and prestigious gems of all Italian States, to be considered with the complete sheet of the 1858 20 bajocchi, as one of the two most significant items of the Papal States, the 20 bajocchi nevertheless being an unissued stamp.

Note: This item was the title page illustration of the very important „Alphonse“ Pontifical States and Sicily auction catalogue by Phillips, offered as lot 136 on 25 October 1990. Described then as „in perfect condition and extremely well preserved“ and confirming its importance with the statement of Enzo Diena as the most valuable item of this State. It was then estimated at £150,000-200,000; in order to compare this item with another important rarity of the Italian States offered then in the „Alphonse“ series of catalogues by Phillips, we can mention that the cover from Sicily including three examples of 50 grana in its franking (illustrated in Sassone on page 388), one of the most important gems of Sicily, was then estimated at £15,000-20,000. The One Scudo Sheet was sold at £200,000, which was equivalent in 1990 to around CHF500,000 (these figures do not include the 10% buyer’s premium additionally charged then).