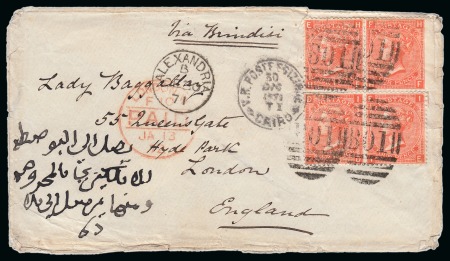 1871 (30.12) Envelope from Alexandria to England, franked with Great Britain 2 pairs of 4d. plate 12 used to make up double letter rate, the stamps have been cancelled on arrival at the British Post Office at Alexandria with the usual “B01” obliterator, ALEXANDRIA / DE 30 71 circular datestamp alongside, unusually this letter has been carried by the Egyptian Postal system from Cairo to Alexandria, cover faults, an attractive and scarce usage