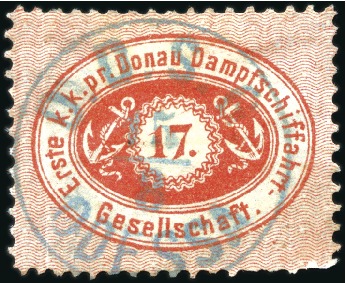 Los 10265
Russia » Ship Mail » Ship Mail in the Black Sea
Realisierter Preis
320 EUR
Schätzung
400 EUR
Auktionsdatum
Sat 3 Dec 2016 at 10:00 (Europe/Zurich)
Beschreibung:
1866-70 D.D.S.G. 10k green and 17k red showing oval and circular datestamps respectively of the Company’s Agency at Odessa, both in blue, 17k with vert. crease, a few short perfs, plus picture postcard of the waterfront at Odessa An agency of the D.D.S.G. was opened at Odessa in 1836 when this important Russian port became the eastern terminal of one of the sea lines of the company. Although the Agency had no right to conduct postal business in Russia, it accepted letters for transmission to D.D.S.G. ports of call on the Danube. As from 1866, these letters were franked exclusively with postage stamps of the company and cancelled with the company’s own Odessa datestamps. Russia tolerated this illegality for more than four years, and only towards the end of 1870 compelled the D.D.S.G. agency at Odessa to stop its postal activity.
Auktion
November 2016 Auction Series (EUR)
Katalog
Russian Ship Mail in Europe, Levant and the F