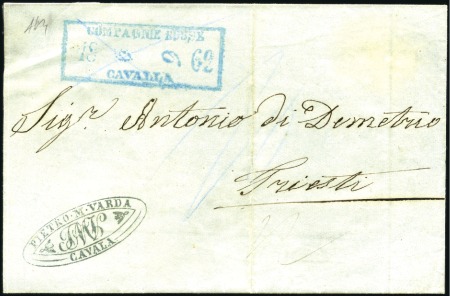 Los 10180
Russia » Ship Mail » Ship Mail in the Levant
Realisierter Preis
1’000 EUR
Schätzung
1’500 EUR
Auktionsdatum
Sat 3 Dec 2016 at 10:00 (Europe/Zurich)
Beschreibung:
1862 Cover (part of back excised) from CAVALLA, on the north coast of the Aegean Sea, to the Adriatic port of Trieste, handstamped rectangular blue framed ROPiT COMPAGNIE RUSSE/CAVALLA 6 9 1862. Company cachet alongside. Faint ’20‘ in blue crayon alongside may indicate a charge of 20 soldi raised at Trieste. By arrangement with the Russian postal administration, ROPiT Agencies were treated as postal branches. From 1859 to the end of 1862 and prior to the introduction of its own postage adhesive stamps in 1865, the Company used rectangular handstruck stamps to indicate payment of postage on mail entrusted to its Agencies for conveyance on its ships. First record of the ROPiT handstruck stamp of CAVALLA and earliest known item of mail from the Russian post in that port. Ex Arsman.
Auktion
November 2016 Auction Series (EUR)
Katalog
Russian Ship Mail in Europe, Levant and the F