The Most Colourful King in Monocolour

Let’s be candid, King Edward VII (1841 to 1910) devoured the pleasures of life in quantities that even back then were considered detrimental to your health. Nowadays, if you consumed such vices, and we’re not just talking about smoking and drinking, in similar proportions one might rightly attract negative judgement as well as a few medical murmurings. But oddly, Edward VII’s brief reign as king – 22 January 1901 to 6th May 1910 – attracted a positive public perception, he was incredibly popular, and his time on the throne marked an important shift in social and economic life in Great Britain. ‘Bertie’, as he was affectionately known, brought a splendid splash and a decent dash of colour after the sorrowing sag and drab of the latter Victorian era. 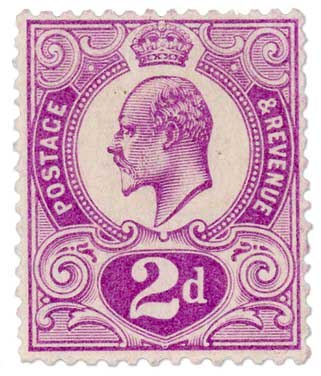 Whilst many philatelic commentators have said that his reign was more colourful than the stamps which depict his tenure, what we are unveiling at David Feldman SA is that polychromatic success, as well as philatelic perception, has little to do with the number of wavelengths or frequencies you are discharging and more to do with the story told in one or two of these perforated effigies. And a man who knew this better than most formed the finest collection of proofs and essays of the postal adhesives of Edward VII’s reign, and we have the pleasure to offer this for sale via Private Treaty, fully intact. Fittingly, the philatelist responsible for this extraordinary assemblage is G.B. Horton.

Graham B. Horton’s (1936 to 2020) dedicated study illuminates the Edwardian period, demonstrating a distinct contrast in reigns between Edward VII with that of his mother’s, Queen Victoria, despite many of the stamps effectively being lifted from the Victorian Jubilee issue, with basically the insertion of Edward VII’s Emil Fuchs’ portrait and a crown plonked into the frame above his head. And that crown set a trend among the subsequent three kings who all followed suit. You see Bertie was a fashionable king, who’s style endured, even if his tone and antics did not. You’ll note that both the Queens who extend long before, and long after our four kings, are featured with crowns on their heads in their profiles on all postal adhesives. Edward VII did things his way and others seemed to follow. 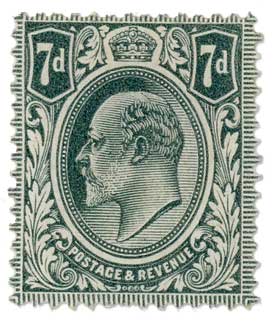 As to the hue of the stamps issued under Edward VII’s rule, here are two words which illustrate how wrong philatelic commentators are. Tyrian Plum. Look it up and see if ever a colour has projected more iconic emotion in a stamp than that little purple tyranny. There are more conspiracy theories surrounding that stamp than are healthy for an unissued postal label, and although some rightly point to the ill-fated timing of its production, making it inedible for public consumption, more philatelists have dined out on that plum than is socially acceptable. And there is another less glamorous stamp which portrays far more light on its subject than it reflects. If our king styled the crown that fashioned his and three future king’s stamps then what about the 7d grey-black?

Some say it’s a murky shade, and granted it almost has a mournful semblance, which wouldn’t have been lost on his mother, but is not this a piece of history distilled into a single value and printing? If we believe in coincidence then there is no greater example of it than the fact that this ‘7d’ was officially available on 4th May 1910, just two days before the death of our Edwardian protagonist on 6th May 1910. His death is exactly 70 years to the day that the Penny Black stepped out onto our philatelic stage, and the day the most colourful king in British’s history bowed out with his final stamp, also being of the black variety. They say becoming a king is destiny, and if so then a  joyfully coloured ‘7d’ wouldn’t have been right in the circumstances, and rather poetically what it could reflect was the sad sombre mood at the end of this distinctly vivid period. His mother might not have approved of his lifestyle, or his overindulgence, but she too would have had to agree that never has there been a stamp so perfectly timed which depicted the public mood and medical judgment of the moment. And she would no doubt have to concede that the Tyrian Plum sums up his philatelic credentials, with all its forbidden features and lavish allure, it emphatically represents the briefest of Royal lines.

There are many other tales and philatelic stories to be found within this wonderful study of the King Edward VII Essays Proofs & Postal Adhesives 1901 to 1911 which is also a rare opportunity to acquire what is a unique collection of immense importance.