Despite the global restrictions we at David Feldman are continuing to receive excellent consignments for our October and December auctions, as well as being tasked with offering items for sale by private treaty.

With our reputation for having sold more high-quality rarities than any other auction firm, we are delighted to present these four stunning exhibition items for sale by Private Treaty. For further details on these spectacular Italian States major rarities, please do not hesitate to contact us.

1858 20 bajocchi yellow, typographed, uncancelled single, one of only six in private hands

Note: The Postal administration of the Papal States wishing to improve the postal service proposed on March 12th, 1858, the issue of a 20 bajocchi stamp which corresponded to the postal tariff for franking letters to France, valid since April, 1853. For still unknown reasons the stamp produced was never issued though a certain quantity were cancelled were later destroyed.

Illustrated and Listed: Encyclopaedia of Rare and Famous Stamps 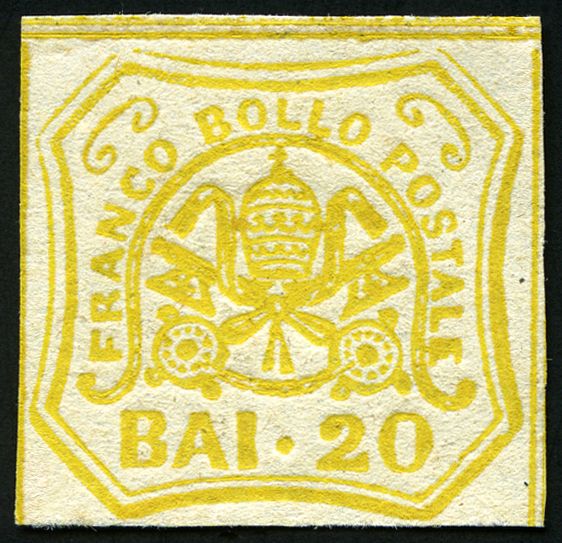 THE UNIQUE LARGEST KNOWN BLOCK OF THE FIRST PRINTING